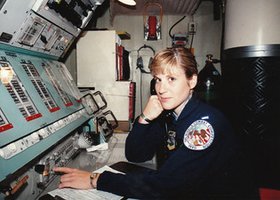 The Air Force Times recently ran a story about F.E. Warren AFB, Wyoming turning one of their missile silos into a museum for the Peacekeeper missile and opening it to the public. (http://www.airforcetimes.com/story/military/2015/11/04/missile-tourism-wyoming-peacekeeper-historic-site-in-works/75161372/) Whiteman AFB, Missouri has already done this for the Minuteman II missile.
“One of the most stressful and least glamorous jobs in the U.S. Air Force during the Cold War went to the men and women who stood ready ’round the clock to launch one of the deadliest weapons ever made, the Peacekeeper nuclear missile.” And I would add the Minuteman II and the other important parts of the nuclear triad.
Reading the article brought back memories of my missileer days. It doesn’t seem that long ago that I was down in that capsule, layering clothes to try to stay warm in the freezing air condition meant to make the computers comfortable–not humans. And having to loop the pistol belt over my shoulder instead of my waist because it was made for a sturdy male, not one of the first females to pull crew in a capsule. The 2-3 hour drives were painful, especially in Missouri winters.
It was pretty thankless. Not the glorious face of the Air Force like pilots. But I wouldn’t trade my time. I’m proud that I was there at the end of the Cold War. I did my part…what was asked of me.
So when you think of the Air Force, remember those that aren’t soaring the wild blue yonder. Think of those that are stuck underground, keeping watch 24/7. And thank an Airman.
We’re here to serve.